As you may know, the ransomware malware is that type of virus that encrypts all your data and asks for a ransom if you want everything back. It has grown a lot lately, becoming a big threat for both enterprise and home users.

In this article I will make a mini-presentation of AppCheck Anti-Ransomware, a complementary security solution that has been designed by Checkmal to run alongside your antivirus software on Windows.

AppCheck Anti-Ransomware is created by a Korean developer and can run on both 32 bit and 64 bit Windows systems, being available as a free and a paid software. The free version provides basic anti ransomware protection, while the pro version provides some functions that may become useful in a corporate environment.

The installation of the app is very easy and straightforward and the app works by itself after installation, but you should configure it as you like if, from the interface, which is very intuitive.

The free version of the app provides real-time protection, exploit protection and MBR protection, but only the paid version provides protection for the network drives. The protection can be toggled on and off from the interface.

This app is really nice to have because it enhances the security of your system. If you don’t need the pro features, you should at least use the free version of it. For more information, see the developer’s website. 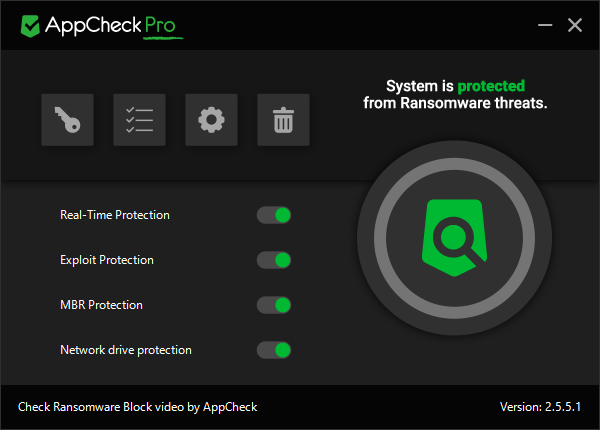 The WannaCry cyber attack has created a lot of panic, due to the fact that it has infected computers from over 120 countries, being the largest ransomware infection in history.

As I work for an outsourcing IT company, I have noticed that people got very worried that such an attack can destroy their businesses and started to buy backup solutions and to invest more in computer security.

In this article I will give you 4 tips that will save your business from a future WannaCry-like computer virus infections.

Backup the fileserver, user data and the operating system:

The easiest way to backup user files is to create a special folder for each user on the fileserver and to back it up constatly, along with the entire server backup. This way, everything placed by the users in their folders are backed up.

From my experience, it is better to backup a single computer or server from the network, instead of backing up files from all the computers on the network. Without a good network infrastructure, this would make the network unresponsive.

In addition to this, another good habbit is to create full system backups of all the computers on the network, making an bootable image of the fresh operating system, with all the drivers installed, all the license keys added and drivers installed. This way, the reinstall process gets done very quick.

Another good habbit is to have a 2 TB or bigger external hard drive and to use it to perform offline backups for the server, when the automatic one fails.

While there are a lot of free decent antivirus software, this is not enough in the business environment. We recommend that you buy an endpoint security antivirus, in order to benefit from extra security modules such as email scanning, certificate scanning, port blocking et cetera.

Despite the fact that we like using ESET EndPoint Security, Kaspersky, Bitdefender and Symantec have good security solutions as well.

Added to this, we recommend using an anti-ransomware software, such as CryptoGuard or RansomFree Cyberreason, which are two pieces of free software that close the encryption process, when the ransomware starts it.

For extra security, or for the paranoid users, we recommend Zemana, a secundary antimalware software that can run along other antivirus software, famous for its anti-ransomware protection.

Keep your operating systems up to date:

A good security practice is to use supported operating systems, like Windows 7, Windows 8.1 or Windows 10. While Windows Updates may make the system a bit unresponsive, it is a necessary evil, let’s say.

A good practice is to update the operating system daily, at the end of the working hours.

Yet another important thing to do is to train the users how to spot malicious emails, ignore the attachments and delete them. In most of the cases, the strange emails are either infected or phishing emails.

I know it’s difficult to keep the network and computers safe, but it’s even more difficult to recover the encrypted data.